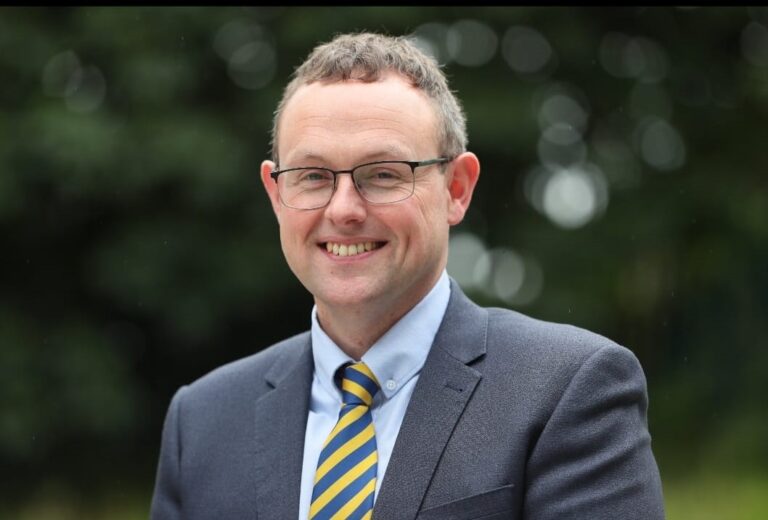 FOR THE FIRST TIME in his political career, Cllr Shane Talty (FF) has been elected as the Cathaoirleach of the West Clare Municipal District.

In 2019, the Lahinch man delivered a remarkable performance in the local elections, topping the poll with 1,977 number one votes to be elected on the first count in the Ennistymon local electoral area in what was his first foray into politics.

On Thursday, he received the backing of his colleagues to succeed Cllr Cillian Murphy (FF) as the Cathaoirleach of the West Clare MD.

Unlike many of the ceremonial speeches that follow when an elected representatives takes on such a position, Cllr Talty used the address to hit out at wastewater issues in North-West Clare and the obstacles posed by the upcoming County Development Plan. “It is an honour to receive the support of my friends and colleagues. I’m a believer in the concept of local politics and decision making so to be given the opportunity to represent the Municipal District as Cathaoirleach is an opportunity I relish,” he stated.

Plenty of lessons have been learned in his three years in politics, “It’s been just 3 years since I entered the Chamber for the first time, with every passing day there is a new experience in the role, it is only now I appreciate how little we knew entering the role”.

Currently the Chairperson of Ennistymon’s football club, Shane referenced his time involved with teams in the club and one of the lines said to teams, “there will always be more matches, defeat is not permanent, we must try to keep the same perspective here”.

Concern was raised by the postmaster on how the upcoming County Development Plan will impede communities “in the midst of a housing crisis”. He added, “From the Burren to Loop Head young people are finding it very difficult to build houses, we must do everything in our power before adopting it in Spring to make it an enabler”.

A heightened sense of frustration was voiced by Cllr Talty on the lack of wastewater treatment plants and the “inadequacy of existing services and intolerable pace of improvements” throughout North and West Clare.

He referenced the showcasing of Lahinch to a global audience in 2019 with The Irish Open and how “we rightly sang the praises of state agencies”. During the pandemic, he said that two sites were developed in the coastal location for housing with 48 built, maximising on the potential for remote working. He flagged how householders here were a barber, a nurse and a Garda, “it is local people keeping their roots and starting their families, it is the definition of sustainable communities”.

This Tuesday, eight housing units as part of the development were rejected, “it was a natural next phase of the existing unit and now the existing units will be left as a ghost estate, what’s worse,” he said was that people were ready to occupy the eight houses. He noted how the developer was willing to install a pre-treatment plant which Irish Water didn’t object to but Clare County Council did. “Even in places of high quality employment, we cannot build housing”. Talty explained that he didn’t invite family or friends to join him in the public gallery but instead two of the individuals that were denied housing as a result of the decision. “I apologise if I’ve gone very political on opening day, I won’t stay at it,” he concluded.

In proposing the new Chair, Cllr Joe Killeen (FF) said he had “great pleasure” in doing so. “Shane has a business degree, he is the person who has a wide interest in lots of areas, farming, sport and he runs a business himself which will be of benefit to us”. Job creation can become a focus over the next twelve months, he believed.

Seconding this, Cllr PJ Kelly (FF) felt the new Cathaoirelach was “a very competent person”. He added, “Shane is a man with a mind of his own, he is a great listener, he has a wonderful way of assessing things before he makes a comment”. Cllr Bill Chambers (FF) voiced his congratulations and said he was “looking forward” to working with Talty.

Following Talty’s opening address, Cllr Killeen declared, “we have to grasp the nettle, we have to call out Irish Water as often as we can”. Low population projections for Clare are to do with Irish Water infrastructure, he believed. “House prices have hugely increased causing great heartache. It’s hotel prices in Dublin but it’s house prices here.

“It’s great to see, I don’t think you can over politicise the role you have, those two issues go to the core of sustainability of West Clare, they are critical,” Cllr Murphy remarked.

Everything in Talty’s opening speech “encapsulated” what is local to North and West Clare, Cllr Ian Lynch (IND) remarked. “Your speech wasn’t about infrastructure, it was about the people”.

Putting planning high on his agenda was welcomed by Cllr Kelly. He spoke of a planning workshop he attended with Cllr Killeen on Tuesday, “If I ever had any doubts about dictatorship, it was evident on that day. An individual from the Department told us part of their team was standing in front of us, throughout the meeting he used the pronoun we will tell you. When a question put to him, he dived for cover”.

Director of Service, Leonard Cleary congratulated the newly elected Cathaoirleach, “It is a very large Municipal District, it is almost half the county in size but an equally large infrastructural requirement”.