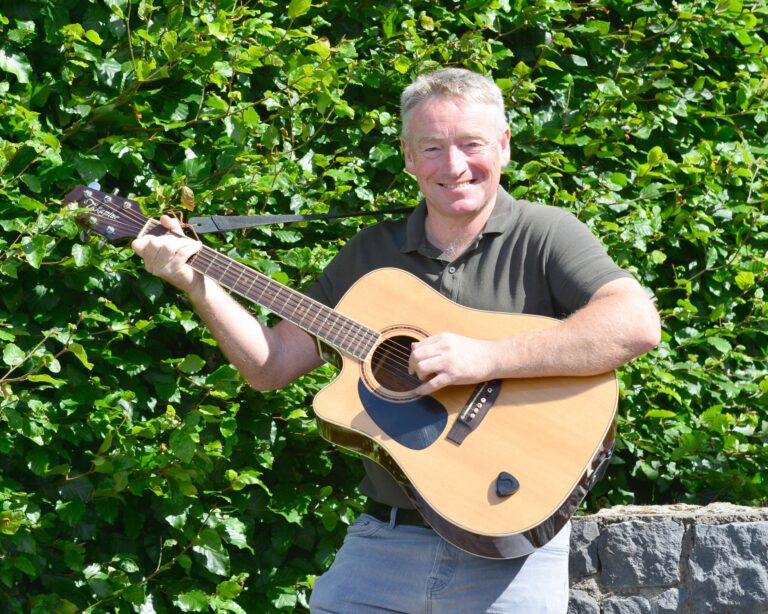 1995 saw the people of Ireland narrowly vote to allow divorce following a referendum, a ban on the sale of Playboy in the country was lifted, the Prince of Wales visited Dublin for the first time but most significantly the Banner Roar founds its voice.

In a magical period for the people of the county, Kieran McDermott produced The Banner Roar which would become the anthem of a season too remember. Dysart’s Dick Cronin penned the lyrics that referenced Eamon de Valera, Daniel O’Connell and Brian Boru but singled out Ger Loughnane as “the decade’s reigning champion”.

After completing the lyrics with Cronin, the next step was to contact members of Raise the Rafters, Kevin Crawford, Martin O’Malley and PJ King who completed the Tulla reel in the middle of the song.

Simon Cowell may have even taken inspiration from McDermott as a series of auditions were then held at The Rocks bar to find bodhrán players, “it became a real piece of craic, it was fun and then it got serious. We ran off 200 cassette tapes at the time, there was no CDs or downloads, it was just cassette tapes, I dropped them into the local shops on a sale or return basis, within three or four days they were sold out so we had to get more done, we took a punt and got 2,000 of them done and it was a real leap of faith, I just got married, had no money and now I was chancing it on a cassette tape. They sold out straight away, we won the All-Ireland semi-final and things really kicked in”.

After appearing on RTÉ with Micheál Ó Muircheartaigh, sales received another boost as did their profile. “We got a call to go on Up for the Match which was presented by Liam Ó Murchú at the time, things got serious because they told us we could only bring 12 and we had to have auditions to see who were the best bodhrán players to bring to RTÉ which caused havoc. We arrived to Donnybrook with nearly three times the quota for the dress rehearsal, there was murder up there, they told us we couldn’t come in and we said we weren’t going on if we weren’t allowed in, people from all over the county were involved as the Banner Bodhrán Beaters”.

From the RTÉ studios, they had to travel to Landsdowne Rd for another gig. “We came from RTÉ and got a fleet of taxis to Landsdowne Rd, there was a massive queue outside and I said to the bouncer that I was playing, he said ‘you’ll have to come up with a better one than that, you’re not going in’, I showed him the guitar and eventually he let me in and I said ‘what about the band’ and the 35 of them walked in behind me, it was just hilarious”.

They also played alongside the Tulla Céilí Band at the victory banquet at The Berkeley Court Hotel. “The rest took off from there, we were on the Six and Nine O’Clock News that night and the Banner Roar was well and truly born at that stage. The cup went around the county from then until Christmas, it would be in Killanena on a Monday, Kildysart on a Tuesday, Kilmaley on a Wednesday and you would go along and end up playing in either the parish hall or the local pub. I was lucky enough to go along with the lads to Boston and New York at Christmas for the ten days, it was a fantastic experience as well, it was a passport to a lot of things, I ended up doing the medal presentations for 1995, 1997 and 2013 which was a great honour and privilege,” Kieran reflected.

Despite belting out the tune night after night around the county, Kieran never tired of The Banner Roar. “I think people got sick of me singing it but I never got sick of singing it, the voice got a bit hoarse from roaring,” he quipped. “It was a magical time, thankfully the videos from the time capture the madness and the ecstasy, it was incredible. To go to Croke Park for the All-Ireland semi-final and to be there and then realise you were going again”.

Kieran admitted to The Clare Echo that he felt ‘How’s it going Lohan’ sang by Sean and Áine O’Callaghan was indeed the best song of the summer. “Everyone was in love with Clare at the time, they were the team from nowhere with the colour, the madness, the painted cars and it all tied in”.

With a rising profile, Kieran was also to avail of more offers including the decision by GoldenPages to open a base in Co Clare and offer the Clarecastle man a position. He has since gone on to become the owner of McDonald’s in Ennis and Shannon.

“It was a moment in time for everybody, the night of the homecoming on the Monday I ended up playing in The Sanctuary in The Queens, the place was overrun and it became one massive nightclub, at some stage in the night they played The Banner Roar in the disco. It’s funny the kids tell me it still gets played in The Queens at different points in the year, it’s weird when your kids are telling you, I obviously hadn’t heard because I wouldn’t get let in now. It was a moment in time. It was a lovely time with lovely memories, I was really lucky to be involved in some way”.

Interestingly, each year in which Kieran has produced a song to mark Clare’s run to the All-Ireland final, they have been victorious on the big day with You’ll Never Beat the Banner (1997) and Stand for the Banner (2013) also released in memorable seasons for the county.