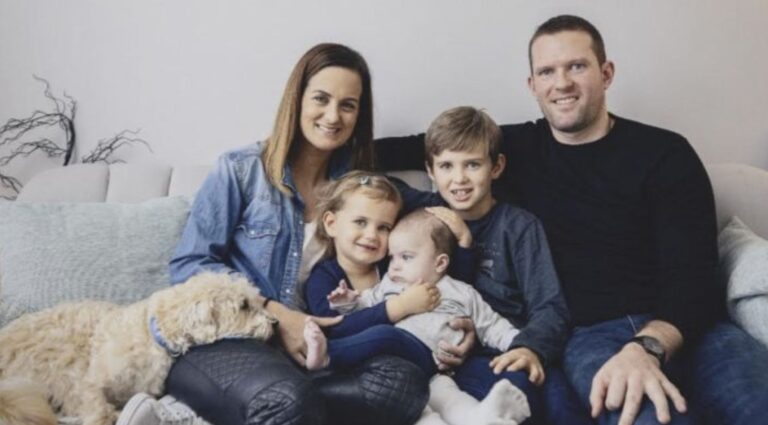 *The late Bridget Loughnane with her family, husband Barry and three children, Harry, Neila and Aaron.

SIXMILEBRDGE and surrounding areas of the county came to a standstill this week for the funeral of Bridget Loughnane (neé O’Halloran).

Thousands of mourners paid their respects to the family and friends of the forty one year old mother of three who died on Saturday evening, shortly after 4pm.

Bridget or Bee as she was more commonly known to her friends was diagnosed with stage four bowel cancer in October 2019, she battled the illness with immense courage and determination.

These were of course traits that the Cappa woman showed on countless occasions when representing The Bridge on the camogie field, some of her opponents will certainly testify to this while others can recall that conversation was plentiful in her company on and off the field.

In the past decade, she returned to college to study to become a secondary school teacher and she graduate from the University of Limerick as an English and PE teacher. Prior to this, Bee worked at Bunraty Manor and the Leisure Centre of the Shannon Shamrock Hotel, everywhere she went she left an impression, largely through her warmth, personality, humour and stunning appearance.

At Tuesday morning’s funeral mass at St. Finnachta’s Church in Sixmilebridge, symbols of her life were brought before the altar, “the gifts in many ways will tell her story,” Fr Harry Bohan noted. They included her Sixmilebridge camogie jersey, hurley with pink grip and marathon shirt to show her determination, commitment and love of the community, a globe to highlight her sense of adventure and love of the world, a textbook in reference to her work as a teacher, a family picture in recognition of her love for her nearest and dearest, a friendship bracelet to remember the strong bonds she built and also a Zara package to indicate her love of shopping.

Fr Bohan said the volume of people passing for four hours and queuing in the rain for Monday’s reposal and the crowds on Tuesday served as “a huge tribute” to Bridget, the O’Halloran and Loughnane families and the respect held for them. He noted the reaction to her death “was enormous” and “since Saturday this community had stood still”.

At each weekend service in Sixmilebridge it was clear for Fr Bohan, “we were a community in grief”. He added, “After all those masses people gathered in small groups outside the church, groups of people were shocked, a local community was shocked”. He acknowledged the “huge gesture of respect” from local publicans who cancelled all music events planned for the Bank Holiday weekend.

Deep roots of the O’Halloran family were recalled by Fr Bohan who commended Bridget’s families for supporting her and Barry on “a long journey, a big battle and a huge struggle”. He told the mass of one message he received from a school teacher following Sunday mass in Sixmilebridge who noted the palpable air of sadness around the village, the woman shared how Bridget was “’a most beautiful person who fought a heroic battle to stay every second possible with her children, Barry and the family’. Then she said ‘I’ll be having Harry in my class in September, I’ll support him and care for him with all my heart’”.

Fr Bohan stated, “We know Bridget was way too young, the fragility and shortness and uncertainty of life comes from this experience we’re having now, Bridget’s spirit was so strong and she fought as the teacher said so hard to stay alive that she would she live on certainly in her children, in Barry and anyone who knew and loved her. She had a lot to live for”.

As part of her fight to stay alive, “everything medically possible was done,” Fr Bohan said. He was struck by the relaxed atmosphere at the family home on Sunday, “they realised she wasn’t able for anymore because nothing else could be done and everything possible was done. Bridget had to go, they had to let her go, they realised that on Saturday, they did let her go, tough and all as it was, the message could have been from her, I’m not going to make it this way, but maybe I’ll continue to be with you from where I’m going to be”.

Speaking from the altar on Tuesday, Bee’s husband Barry Loughnane voiced their appreciation with the groundswell of support evident in recent days. “Bee was an absolute amazing person with numerous magnificent qualities, thankfully for me all those magnificent qualities will live on Harry, Neila and Aaron, she will never leave us,” he said.

Her battle with cancer had been “absolute torture” over the past three years but he admitted to being struck by the determination and refusal of his loving wife to complain. The “exceptional support group” and pools of friends that she had were central to her surviving for so long, Barry felt. “Our families have been phenomenal, they’ve seen most of the hardship we’ve been through, without them we wouldn’t have got this far. Our appreciation is unfounded”.

Her selflessness to “find the strength” for other people was amazing and often followed periods when she had been bed bound for days. “She is the definition of toughness, she never once complained with all the tough surgeries. Her determination, boy God was she determined to live as long as she could, if someone said eat nettles she went out and ate them, she tried everything she possibly could, she fought to the bitter end,” the Shannon man added. Her shopping habits and the one occasion where she spent €20 on cherry tomatoes in France also brought a smile to congregation packed into the church.

“Even though today is an extremely sad day, just because she’s gone doesn’t mean we love her any less or that we will stop loving her, it always means we will never stop feeling the love she had for us. Love you Bee, see you later,” Barry concluded to rapturous applause.

Bridget was the beloved wife of Barry and loving mother of Harry, Neila and Aaron, daughter of Caroline and Seamus (RIP), daughter in law of Mary and Ger, sister to Mary (Crosbie), Ann (Sweeney), Michael, Gerard and Paul, sister in law to Ciaran, Derek, Ardia, Ciara, and Jodie. An aunt, a niece, a cousin, and a friend to so many.